Unfriended, is a found footage movie, but not as we know it. It’s filmed in the point of view perspective, of the main character, Blaire’s MacBook, while she Skype video chats, with 5 of her high school friends.

The basic jist of the film here, is… A girl gets cyber bullied, to the point of killing herself, after a video of her, having a drunken mishap at a party, is posted on YouTube. On the first anniversary of her death, comes back to get some good old-fashioned revenge… But this isn’t just another film, re-telling the story, about how a group of friends, get haunted by a vengeful spirit… This is quite clever, and its own way, quite unique.

We’re introduced to the movie, by a live leak video, showing a girl, called Laura Barnes, committing suicide. And then shown the video of her having the previously discussed, drunken mishap, at a high school, house party.

Main protagonists Blaire, and her five friends, who are 2 girls, called Val, and Jess, and 3 guys, called Ken, Adam, and Mitch, are video chatting on Skype. After they’ve all greeted each other, they very quickly realise, there is someone else in the private, group video chat with them, and they’re not alone. The person has a plain blue avatar, and no matter what they try, they can’t disconnect this person from the call. They first dismiss it as a glitch, but then the glitch starts to send typed, instant messages to the group. Blaire and the others, receive vicious threat messages, from the mystery person, saying if they hang up, they will die. 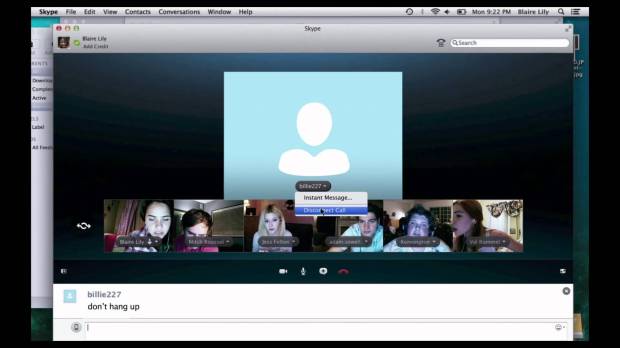 One of the girls, decides that she has had enough, and does hang up. In front of everyone, she is made an example of. 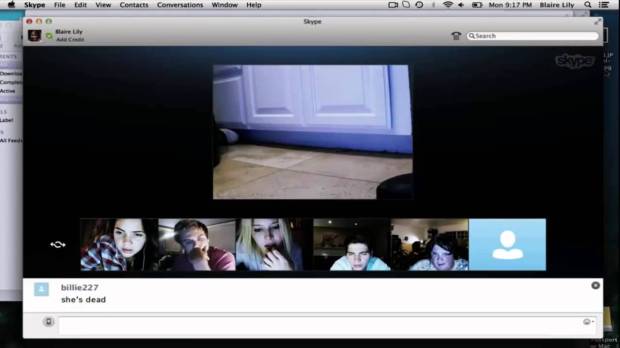 And in true ‘Saw’ type style, tells them, they’re going to play a game of ‘Never Have I Ever’ and the first to lose will die… and then the next one to lose after that, and so forth, until there is one left. Then, just before they start playing, the person reveals who’s really behind this online assault. The group choose to not believe this, and the assailant turns out everyone’s lights.

Terrified out of their wits, they begin the game. They are all asked, varied questions, of a very intimate nature, designed to turn them against each other. It works to great effect. One by one, they run out of fingers, and again, each person that loses, is made an example of to the rest, in a more brutal fashion than the last, until one remains. A big mistake made by the sole survivor, in their past is posted online, for the world to see, and where it lays, forever it will stay. Forever haunted by their lies and wrong doings.

What is important about this film, is theme, or message of it working as a deterrent to online/cyber bullying, as. It is a harsh, real life reflection, of the lengths some people will go to, when they’re pushed over edge, and feel there is no way out, but suicide.

The acting is of a high standard and a credit to the film. You really feel the terror they’re feeling, and the emotional pain and anguish they’re going through. The dialogue is relevant too, and works well for the nature of the film. Visually, it flows well, from video chat as a group, to direct messages, between different members of the group. The way this aspect of the film is out together, is really quite clever. It helps in bringing out the characters personalities, traits and flaws. The more the film goes on, I found myself switching from thinking, ‘oh my god, these poor teenagers, are being stalked, and are scared out of their minds’, to then finding out, more about the group, and realising, they’re actually a collective bunch, of back stabbing bastards… And ultimately, started rooting for the so-called ‘villain’. With teen horrors, you run the risk of turning the whole film into one big cliché, but the writer and director manage to avoid this, which made me very happy. It’s a solid film.

Negatives that I could pull from the film, would be that during the Skype video chat segments, on each of the characters there is constant 5 second burst of a grainy webcam and lag. Here and there, would be ok, but it’s constant through the whole film and it’s incredibly annoying. More is not always better. I understand that they would want to feature this, to try, and make it look as realistic as possible… But it’s too much.

The production company behind this film, Blumhouse Productions, have definitely got the formula nailed, when it comes to found footage movies. Movies, that in monetary terms, can be made for next to nothing, as far as making movies goes, and will make a huge profit at the box office. Previous success with found footage film, has been with such titles as, the Paranormal Activity franchise, and Ouija, to name but a few. In the instance of Unfriended, the movie in its entirety, was made for around $1,000,000, and took in an estimated $38,000,000 in the U.S alone. That’s a massive return on their investment.

It’s no wonder then, that a sequel is already being made, and will arrive in 2017. An exact date is still to be confirmed.