It’s our pleasure, to introduce you, to the latest horror film, from Clear Focus Movies.

Ghosts of Darkness, is the third feature film, to come from Scottish Writer/Director,
David Ryan Keith.

The two previous efforts, were 2011’s zom/com spectacular, Attack Of The Herbals, and 2014’s blood thirsty, ‘teens in the woods’ slasher, ‘The Redwood Massacre’.
Both of the films are unique, and clever in their storytelling, and choice of sub genre.
They follow completely different paths, instead of sticking to one type of film, and regurgitating the same film, with a different name and location.
To that end, Ghosts of Darkness, certainly follows in the footsteps of its predecessors. But with this one? Things have been kicked up to a whole new level.

“All These Deaths, Took Place In This House?” – Jack Donovan

Filmed in Scotland, Ghosts Of Darkness is the first feature film, that the talented Scottish director has made in the paranormal genre.
The film secured worldwide distribution, before a scene had even been filmed, with American distribution company Uncork’d Entertainment in August of 2015.
The film will make its world premier at the acclaimed ‘Bram Stoker International Film Festival’, at the end of October 2016, and will be released on DVD/VOD, in March 2017.

On the strength of their reputations, slick American, paranormal investigator, Jack Donovan (Michael Koltes), and eccentric Englishman and psychic, Jonathan Blazer (Paul Flannery), are paired together in a large manor house, with a dark and shady past, in the hope of solving a mystery, that’s had people guessing since the 1800’s.

To do this, Donovan and Blazer, will be locked in the house, for three nights, to record their findings, and prove once and for all, whether there are secrets lurking within the walls. Shortly after starting their investigation, they discover to their horror, that are numerous, very real paranormal entities, that mean to do them harm.
The two men must put their differences aside, if they want to survive their stay, at Richmond Manor.

Jonathan Blazer, is a powerful psychic, whose main tools for his work are a spirit board, and a book of demonology. He is for sure, the comic relief.

He’s a well spoken gentlemen, who oozes class.He brings a Richard E. Grant-esque performance, in the style of Withnail, from the cult 70’s classic, ‘Withnail and I’. His quick wit allows, albeit momentarily, for a breather from the overbearing job at hand. But when it comes to the crunch, you see the other, more serious side of Blazer, even the fearful and slightly vulnerable side of Blazer. As things start to go from bad to worse for the two, and being the more experienced, at handling these types of cases in these types of cases, he has to be serious, and make the executive decision as to how things are going to be done. But even he knows he is out of his depth, and as time grows shorter, the stakes get higher, in the race to get out of Richmond Manor alive.

Jack Donovan, is a firm, complex character, who will not be taken for a fool. He is an extremely talented Paranormal investigator, who by trade, is the best at what he does, at exposing frauds, who are in his own words “just trying to make a quick buck”. 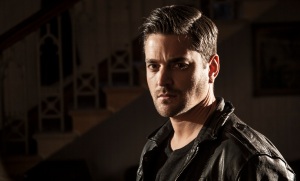 To do his work, he has lots of expensive gadgets, such as motion sensors, temperature sensors, EMF readers, fancy cameras, and much more, which Blazer finds not only amusing, but pointless.

Donovan’s story, is one of heartbreak and loss, and really, he is like a big ball of elastic bands. As he unravels, you come to understand why he has so much distrust and contempt towards Blazer.
When he realises, that this job, is not just exposing some fraud, and is like nothing he’s ever experienced before, he learns to believe in, and trust his fellow protagonist. He realises he can integrate his methods, with Blazers methods, and forms a real working and personal respect and friendship for him.

The practical effects are second to none, as with the two previous films, from this talented Scottish writer/director.

The special effects and makeup team that worked on this film, need to take a bow. The ghosts and demons look genuinely threatening and scary. The eyes are the window to the soul, and firstly with the ghosts, the big black eyes show us an element of pure evil and bad intentions. The blackness in the eyes, reminded somewhat, of a film called ‘Grave Encounters’, which was terrifying, so this really worked well.  The skin, as you would expect for a ghost is very pale, almost grey, and is made up to look dead and scarred. Its been done very effectively.

They really are the epitome of evil. If you had one of these walking towards you in a dark house in the middle of the night, you’d have a heart attack.
Its hard to imagine that there is actually a person under that make up and that its not something straight from the necronomicon. The time and  detail that has gone into that has gone into creating the gaping wounds and decomposing flesh is astonishing.

“Ghosts of Darkness Is Fantastic. You’ll Be Gripped By It.”

Its a celebration and a triumph, for Scottish indie-horror, film making.
Do not make the mistake, of thinking this is yet another film, that’s riding the coattails of paranormal activity. This is a film that stands on it its own two feet.
Creating a film about two men, running round a house chasing ghosts, is by no means an easy thing to do. It could have been so easy for things to have gone stale and fallen flat, but the dialogue, which is slick, witty and funny, and the moments of major intrigue, and non stop action, does not let the film fall into that trap. The pacing of the film is great. Its not a film you have to be patient with,  and then only delivers the frights at the end. Its gripping the whole way through. To begin with, ghosts tease the pair, with noises, apparitions, and poltergeist activity.
Upon the two protagonists being introduced, and are left to go about their work, Blazer is looking for something to drink, and Donovan is convinced, that being there, is nothing more than a publicity stunt.
Little do they know at this point, that within the walls of Richmond Manor, there really are things that go bump in the night.
Things then go from bad to worse, as demons enter the fold, and start to prey on their inner most feelings, and then turn to acts of physical harm, with the use of weapons, extreme violence, and much worse.
The best part of the film, is the relationship between Blazer and Donovan. The pair, seemed so at ease, not only with each other, but in the roles they were portraying. Its obvious there was a good camaraderie between Koltes and Flannery, because although their characters are very chalk and cheese, they worked so well together. You are taken on a wonderful journey with the pair, from them butting heads, to forming a mutual respect, and most important of all, a real friendship.

In closing, this is not a film you’re going to want to miss. You’ll be sorry that you did. Be sure to  be ready for the release of ‘Ghosts of Darkness’ in March 2017.

As always, we’ll keep you up to date with any further info as we get it.